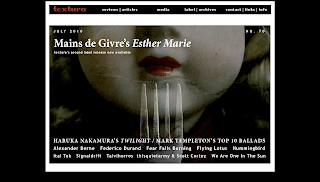 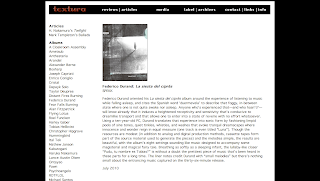 Federico Durand oriented his La siesta del ciprés album around the experience of listening to music while falling asleep, and cites the Spanish word ‘duermevela' to describe that foggy, in-between state where one is not quite awake nor asleep. Anyone who's experienced that—and who hasn't?—will know already that it induces a heightened receptivity and sensitivity that's conducive to dreamlike transport and that allows one to enter into a state of reverie with no effort whatsoever. Using a ten-year-old PC, Durand translates that experience into sonic form by fashioning limpid pools of sine tones, quiet tinkles, whistles, and washes that evoke tranquil dreamscapes where innocence and wonder reign in equal measure (one track is even titled “Luna”). Though the resources are modest (in addition to analog and digital production methods, cassette tapes form part of the source material used to generate the pieces) and the melodies simple, the results are beautiful, with the album's eight settings sounding like music designed to accompany some magisterial and magical fairy tale. Breathing as softly as a sleeping infant, the lullaby-like closer “Pudu, tu nombre es Tobias?” is without a doubt the prettiest piece of music that's been heard in these parts for a long time. The liner notes credit Durand with “small melodies” but there's nothing small about the entrancing music captured on the thirty-six-minute release.