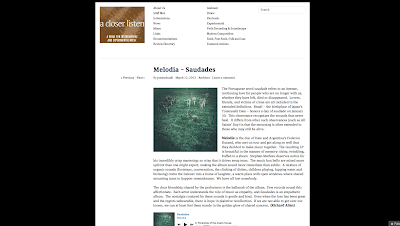 The Portuguese word saudade refers to an intense, continuing love for people who are no longer with us, whether they have left, died or disappeared.  Lovers, friends, and victims of crime are all included in the extended definition.  Brazil – the birthplace of Japan’s Tomoyashi Date – honors a day of saudade on January 30.  This observance recognizes the wounds that never heal.  It differs from other such observances (such as All Saints’ Day) in that the mourning is often extended to those who may still be alive.
Melodia is the duo of Date and Argentina’s Federico Durand, who met on tour and got along so well that they decided to make music together.  The resulting LP is beautiful in the manner of memory: shiny, twinkling, buffed to a sheen.  Stephan Mathieu deserves notice for his incredibly crisp mastering: so crisp that it drives away tears.  The music box bells are mixed more upfront than one might expect, making the album sound more immediate than subtle.  A mixture of organic sounds (footsteps, conversation, the clinking of dishes, children playing, lapping water and birdsong) invite the listener into a home of laughter, a warm place with open windows where shared mourning turns to happier remembrance.  We have all lost somebody.
The clear friendship shared by the performers is the hallmark of the album.  Few records sound this affectionate.  Each artist understands the role of music as empathy, and Saudades is an empathetic album.  The nostalgia conjured by these sounds is gentle and kind.  Even when the loss has been great and the regrets unbearable, there is hope in plaintive recollection.  If we are not able to get over our losses, we can at least feel them recede in the golden glow of shared concern.
Text by Richard Allen
*
Muchas gracias A Closer Listen & Richard Allen por la bella reseña, F.
Etiquetas: A Closer LIsten, Federico Durand, Melodía, Own Records, Richard Allen, Saudades, Tomoyoshi Date
Entrada más reciente Entrada antigua Inicio