A beautiful review by Textura (Canada) 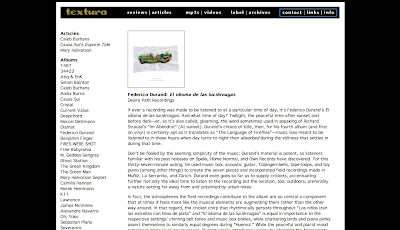 
If ever a recording was made to be listened to at a particular time of day, it's Federico Durand's El idioma de las luciérnagas. And what time of day? Twilight, the peaceful time after sunset and before dark—or, as it's also called, gloaming, the word sometimes used in speaking of Richard Strauss's “Im Abendrot” (At sunset). Durand's choice of title, then, for his fourth album (and first on vinyl) is certainly apt as it translates as “The Language of Fireflies”—music less meant to be listened to in those hours when day turns to night than absorbed during the stillness that settles in during that time.

Don't be fooled by the seeming simplicity of the music: Durand's material is potent, as listeners familiar with his past releases on Spekk, Home Normal, and Own Records have discovered. For this thirty-seven-minute outing, he used music box, acoustic guitar, Tübingen-bells, tape-loops, and toy piano (among other things) to create the seven pieces and incorporated field recordings made in Muñiz, La Serranita, and Zürich. Durand even goes so far as to supply crickets, accentuating further not only the ideal time to listen to the recording but the location, too: outdoors, preferably a nature setting far away from and untainted by urban noise.

In fact, the atmospheres the field recordings contribute to the album are so central a component that at times it feels more like the musical elements are augmenting them rather than the other way around. In that regard, the cricket chirp that rhythmically persists throughout “Los niños izan las estrellas con hilos de plata” and “El idioma de las luciérnagas” is equal in importance to the respective settings' chiming bell tones and music box tinkles, while chattering birds and piano plinks assert themselves to similarly equal degrees during “Huemul.” While the peaceful and placid mood remains in place in all seven pieces, Durand wisely introduces variety by changing the focal points within the arrangements from piece to piece. In “Mumi,” for example, it's acoustic guitar whereas it's piano or music box elsewhere.

El idioma de las luciérnagas truly is music that encourages you to close your eyes and be transported by the music. Listening to the blurred tones softly whistling through the haze of “El espejo de mil años” evokes the calm of a late-July evening, while “Una ciudad al pie de las montañas” conjures the image of someone lying in a hammock on a summer day surrounded by birds and soothed by the sounds of soft music drifting into earshot from somewhere nearby.

Thank you very much Textura for this wonderful review!