A wonderful review from Textura! 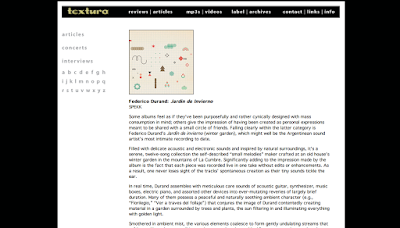 Some albums feel as if they've been purposefully and rather cynically designed with mass consumption in mind; others give the impression of having been created as personal expressions meant to be shared with a small circle of friends. Falling clearly within the latter category is Federico Durand's Jardín de invierno (winter garden), which might well be the Argentinean sound artist's most intimate recording to date.
Filled with delicate acoustic and electronic sounds and inspired by natural surroundings, it's a serene, twelve-song collection the self-described “small melodies” maker crafted at an old house's winter garden in the mountains of La Cumbre. Significantly adding to the impression made by the album is the fact that each piece was recorded live in one take without edits or enhancements. As a result, one never loses sight of the tracks' spontaneous creation as their tiny sounds tickle the ear.

In real time, Durand assembles with meticulous care sounds of acoustic guitar, synthesizer, music boxes, electric piano, and assorted other devices into ever-mutating reveries of largely brief duration. Many of them possess a peaceful and naturally soothing ambient character (e.g., “Florilegio,” “Ver a traves del follaje”) that conjures the image of Durand contentedly creating material in a garden surrounded by trees and plants, the sun filtering in and illuminating everything with golden light.

Like many an artist before him, Durand's release also benefits from SPEKK's trademark book-like presentation that in this case includes an eight-page insert featuring charming illustrations by Cecilia Afonso Esteves that effectively capture the spirit of Durand's creations.