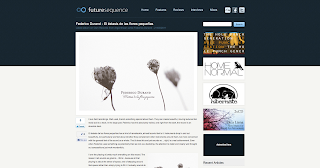 I love field recordings. Well used, there's something special about them. They can create beautiful, moving textures that really add to a track. In the large part, Federico has this absolutely nailed, and right from the start, the record is an absolute treat.

El éxtasis de las flores pequeñas has a kind of ramshackle, almost laconic feel to it. Instruments drop in and out beautifully, not particularly worried about whether they complement other instruments around them, but more concerned with the general feel of the sound as a whole. That it does this and yet sounds so ... right, is a real achievement. Even when Federico uses something as potentially tired as rain as a backdrop, the attention to detail and clearly well thought out compositions just work wonderfully.

I love the playing of pretty much everything on this record. The reason it all sounds so great is - I think - because all that playing is about the sense of space, and of stepping around that space rather than simply trying to fill it. It actually sounds to me like those sounds are tumbling in, a sense of the accidental. There's a real sense of understanding that it's as much about what you do play as what you don't. Of course everybody knows that - I'm hardly writing anything new here, but the difference is that's it's one thing to know that, and another to do it. It takes quite a lot of bravery and belief in what you're doing to give your sounds the space they need and let tracks breathe. This record really gets that.

So what you get on the record is storms, tumbling guitar, lovely simple drones, spacious, almost distractedly picked guitar parts that sound something like Gustavo Santaolalla would play, and varying field sounds across the recordings, that almost without exception work really well within the pieces. Even the piano - which can often sound quite clinical and detached on some records - sounds like it's being played on a one hundred year old piano that's just been tuned for the first time in years and is finally sharing it's sounds with you. In short, this record just sounds, real, heartfelt ... authentic.

As favourites tracks go, I gravitate towards Los niños escriben poemas en tiras de papel rojo, La casa de los abuelos and Kim at the moment, but all the tracks are great and it's a consistently high quality recording. I could have done without a couple of (what I think are) bird sounds on El éxtasis de las flores pequeñas, which distract from the feel of that track as a whole, but that's pretty much the only criticism I have, and a really minor one.

Simply put, this record is quite, quite wonderful. Highly recommended.

Thank you very much!