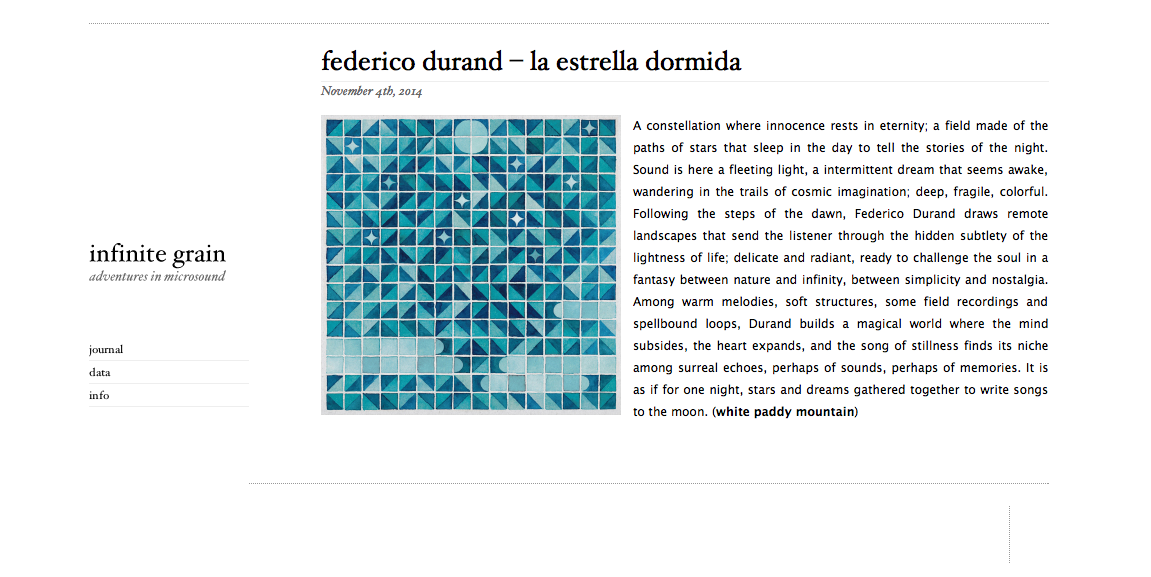 A constellation where innocence rests in eternity; a field made of the paths of stars that sleep in the day to tell the stories of the night. Sound is here a fleeting light, a intermittent dream that seems awake, wandering in the trails of cosmic imagination; deep, fragile, colorful. Following the steps of the dawn, Federico Durand draws remote landscapes that send the listener through the hidden subtlety of the lightness of life; delicate and radiant, ready to challenge the soul in a fantasy between nature and infinity, between simplicity and nostalgia. Among warm melodies, soft structures, some field recordings and spellbound loops, Durand builds a magical world where the mind subsides, the heart expands, and the song of stillness finds its niche among surreal echoes, perhaps of sounds, perhaps of memories. It is as if for one night, stars and dreams gathered together to write songs to the moon. (white paddy mountain)

Buenos Aires-based sound artist Federico Durand sets the tone for his La estrella dormida (The Sleeping Star) with a liner note that reads, in part: “Sometimes at dusk, from the train window, I can see the first star in the sky. Its light is a company that stays by my side during the travel until it gets dark. Then, like a magical presence, the stars, with its shining melody, invite me to dream.La estrella dormida ... is an album to listen to at sunset, during that moment when the sky changes its colour and houses and gardens turn pink, silent, and musical at the same time.” Such words provide a perfect entry-point for the forty-two-minute release, given that their evocative, dream-like tone form a natural complement to the ten settings.

If the music is characterized by one thing in particular, it's intimacy: not only is the listener made to feel as if he/she has been granted access to Durand's inner world, the recording and its “small melodies” were created by him alone using piano, E-bow, analogue synthesizer, music boxes, cassette-tape loops, crystal glasses, and assorted other “tiny things.” There's a hazy quality to the production and a relaxed feel, too, both of which suggest that La estrella dormida was recorded in the comfort of Durand's home.

The pieces themselves are less songs than ambient soundscaping vignettes sprinkled with microsound textures and melodic fragments. Each piece drifts placidly along for two to six minutes at a time, with delicate, fluttering breaths of piano, bells, guitar, and synth tones draped across the tracks' gently undulating surfaces. Perhaps none of the pieces is lovelier than “Reflejos del sol en la superficie del agua,” a twilight ambient serenade that unfolds with a finely calibrated grace, while the one that's most dream-like is “El sueño de Fabergé” for featuring so prominently the bell-like warble of the music box.

Anyone acquainted with the White Paddy Mountain releases issued prior to Durand's will identify La estrella dormida right away as a natural member of that particular club, given that the albums Chihei Hatakeyama has released on his label to date have all shared a stylistic concern for understated ambient soundsculpting. 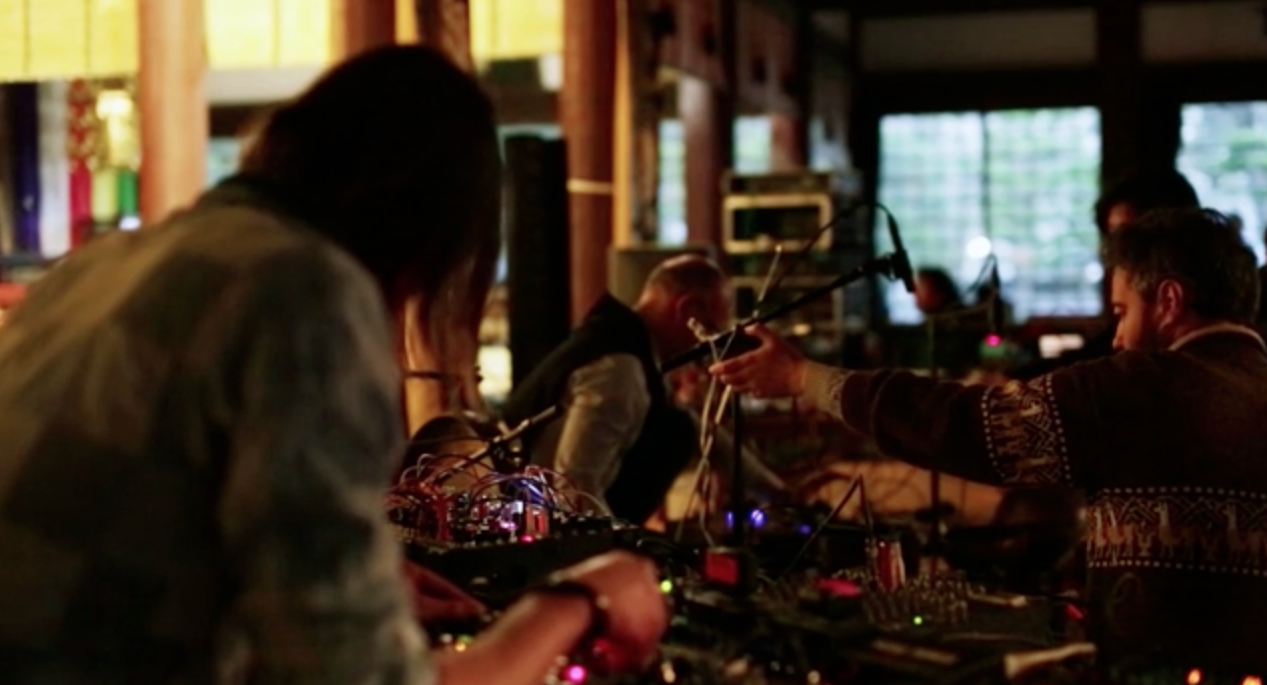 Music in a beautiful old temple in Kamakura, Japan.

You can see an excerpt of this concert :

Have a nice day! 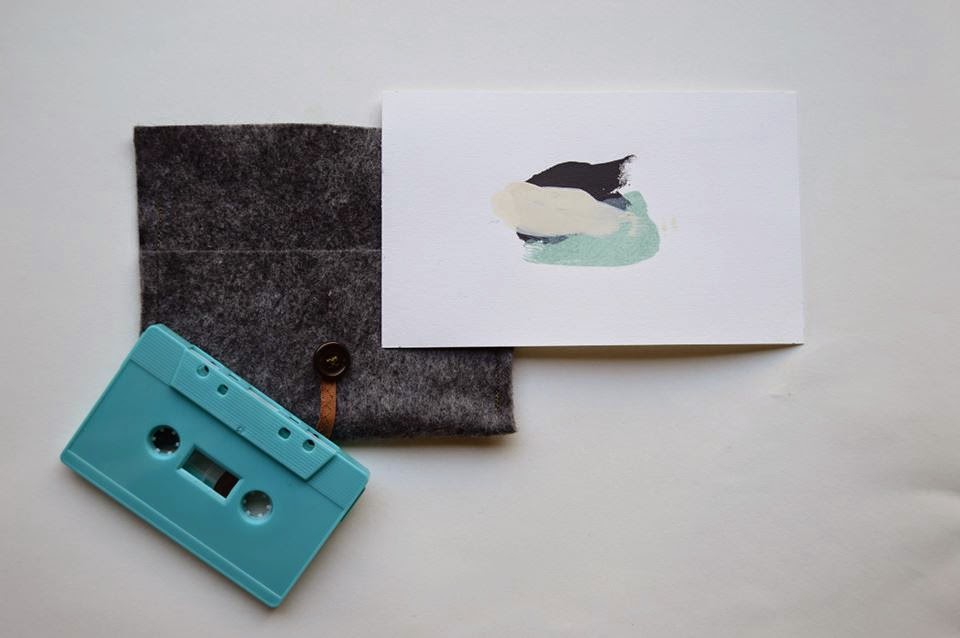 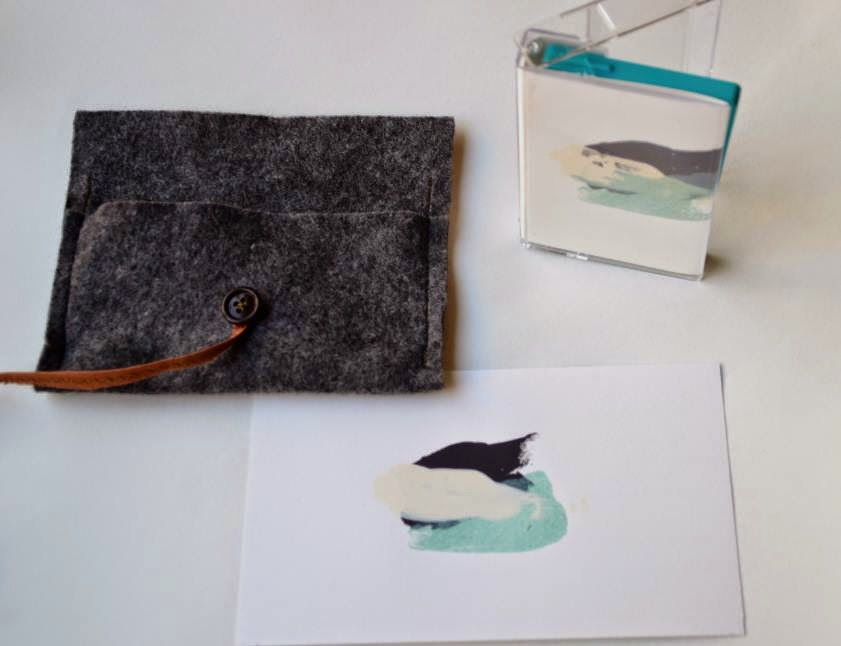 "Adormidera” is the Spanish word for poppy flower. This tape, originally released as a very limited tour souvenir, has two long pieces crafted with circular melodies. 70's and 80's cassette tapes were used during the recordings.
The first piece "Niebla, montaña, pinos" is a transcription of a dream where a choir of girls sung to celebrate the harvest. I made it with very lo-fi recordings from Youtube.
The second piece is "Adormidera” in which I also used layers of voices, acoustic guitar and piano. 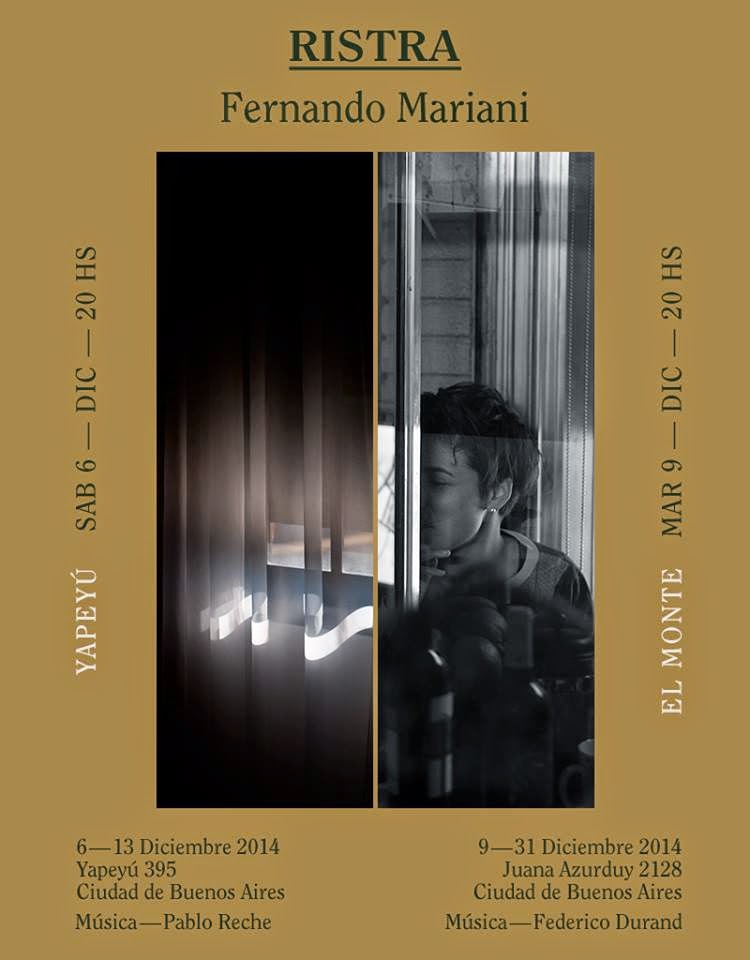 Adormidera was released in 2012 by my own tape label Pudú with my Sao Paulo friends from SNPB for the European Tour.


This cassette was soldout during the concerts.

Now... A very limited repress will be released by Dauw, from the old flamish city of Ghent, Belgium.
50 copies -only- with original artwork made by Femke and Pieter.Each tape is an unique pice of art.

Some pictures of the art-work process: 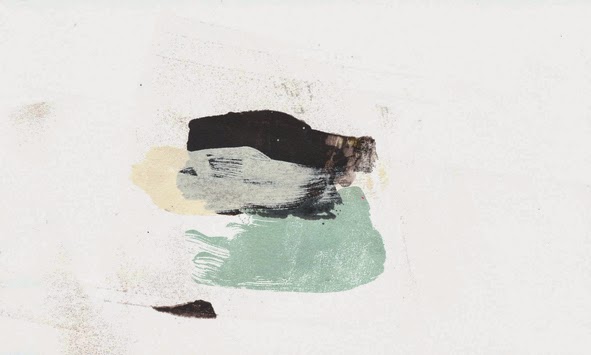 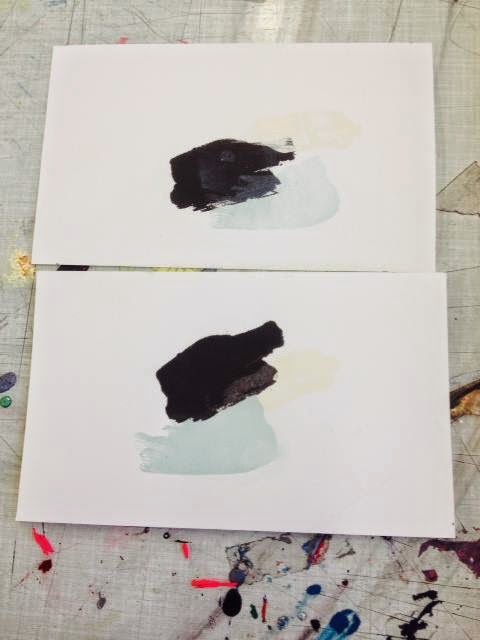 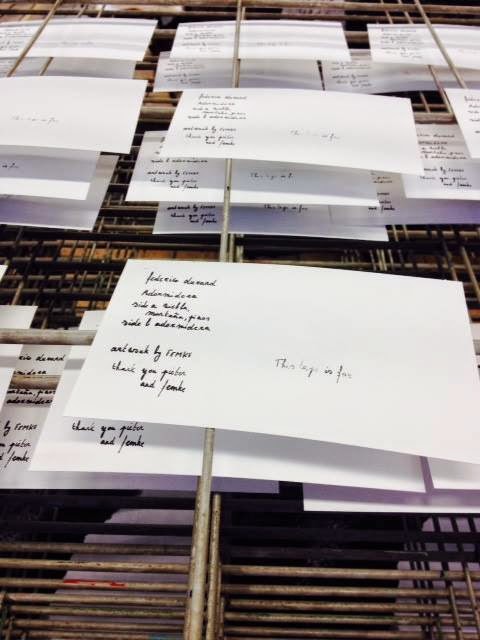 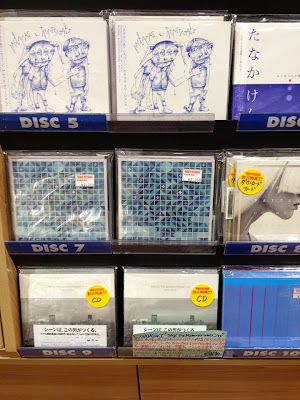 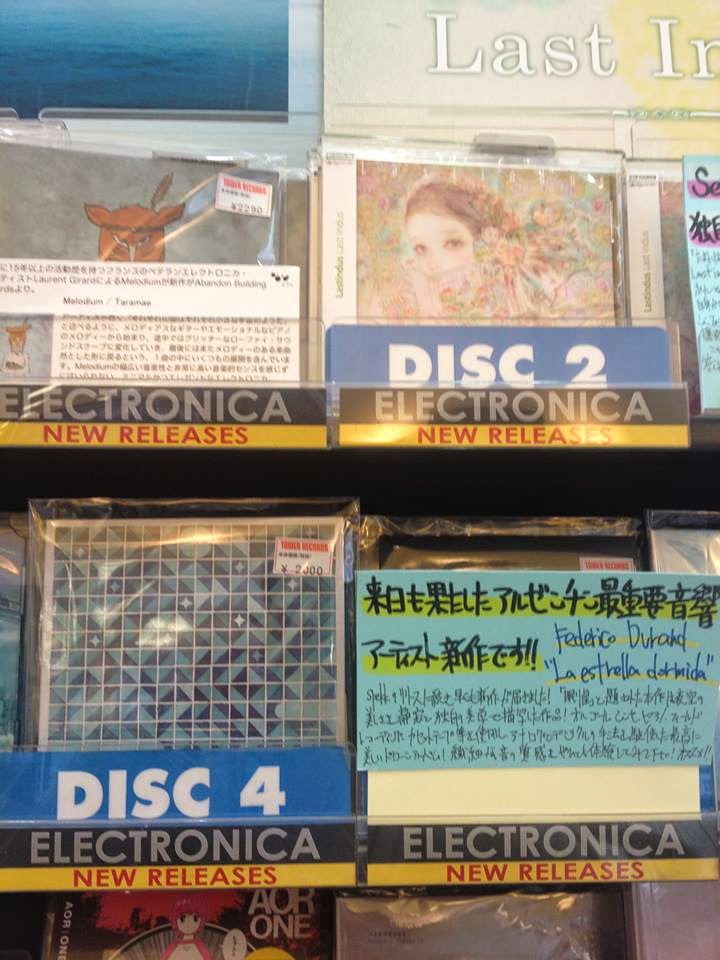