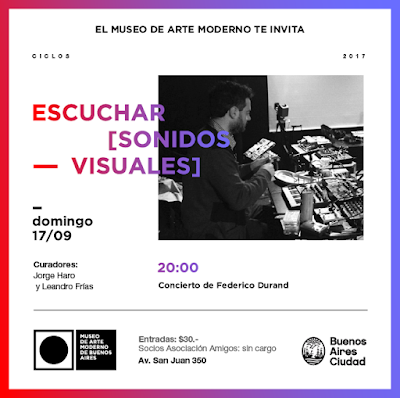 A beautiful review & story by Fiftyfootshadows 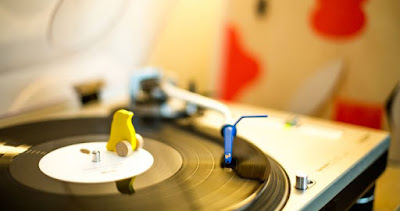 Ambient music has continued to be a stabilizing force within my day to day life. It breathes calm into moments of chaos and helps moments of joy feel transcendent. Among my favorite discoveries lately is the album La Niña Junco by Federico Durand released on the 12k Label.

The album has a purity to its concept that I greatly admire and appreciate. The whole of the release was created using one single synthesizer, and to great effect. It causes each song to pool into a collective whole as if each new exploration of the instrument is a single block building a home, a cozy, light filled home from open windows and warm summer breeze. While that may sound over the top, its my best attempt at describing how its left me feeling at times.

Hidden among the album is a song which has quickly become a quintessential piece of ambient music within my all time favorites called Navidad en el bosque. When I first heard it I must have left it on repeat for an hour, and continue to come back to it time and time again. It is both somber and hopeful, contemplative and full of subtle life with its waves of light hearted sound. Its the kind of music that makes the world around me feel empty without it playing within it.

While most 12k releases come out in physical form via CD, this one has a well suited vinyl edition that sounds beautiful. If you are curious about the toy bird in the photo above. It came in a pack of Japanese caramels and has lived around my turntable for a long while. When I started to share the process of playing vinyl records with my one year old daughter I placed the toy on the label so she could see that the disc was spinning around and around. Now, at 16 months old she loves to make attempts at helping me play records and because I included the bird as part of that initial learning experience, now she won’t let me play a record without the little wooden bird spinning round and round there on the record along with the music because, of course, thats just part of what makes it work. She sure loves music, which really brings me joy.

At any rate, if you are into ambient, contemplative music then be sure to have a listen to this fantastic release on 12k (which just happens to currently have a summer sale going on through the end of the month so its a perfect time to pick up a copy if you end up enjoying it as much as I have.) 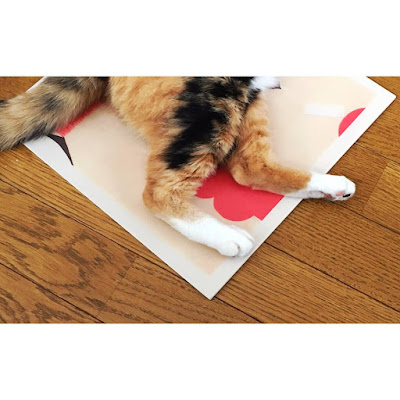 You can enter to Hitomi Koma's beautiful world HERE.

Thank you very much! F.

Concert & exhibition in our small bookstore in La Cumbre 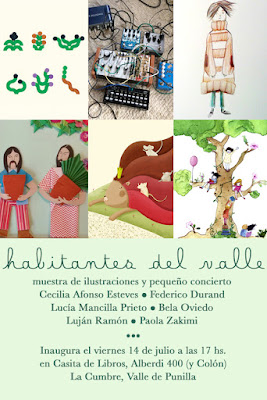 A wonderful review by Data.Wave

All the tracks from the new album La Niña Junco (released on the label 12k) by Federico Durand are real lullabies reminding us of the beautiful and tranquil time of our childhood. You won't find any radically innovative musical moves here; instead you'll see how using just sincere ingenuity and sound a musician can create a musical piece with ease and simplicity.

The first track La historia de la niña junco is a tender beginning to Federico's story. Just a few minutes in
we can already feel the forest and the sound of the wind, listening to his track with a title that speaks for itself:Navidad en el Bosque. I'm also impressed by the harmony of the background noises and the lead melodies of the tracks. Far-away rustles, micro-sounds and keys of the track Rondel also perfectly fit the overall theme of the album. The mood of this work is pensive and melancholic.

In my opinion, the main «talking» piece of La Niña Junco is the track called Una plaza junto a las vias del tren; its light and marvellous melody sticks in your memory. It should be noted that the original cover for this release was created by Lola Goldstein, a famous artist from Argentina, the home country of the musican himself.

As listen to it again and again, I like to imagine how multiple generations of young people grow up listening to the sounds of Federico Durand's music; and let us not forget about the adults, they can be dreamers as well!

New Kazuya Matsumoto by Spekk (Japan) with a special CD souvenir with a concert we made in Niigata, 19th. March 2017 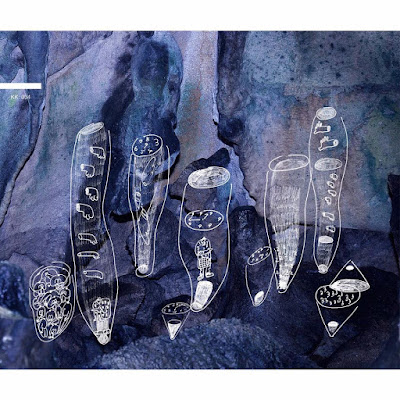 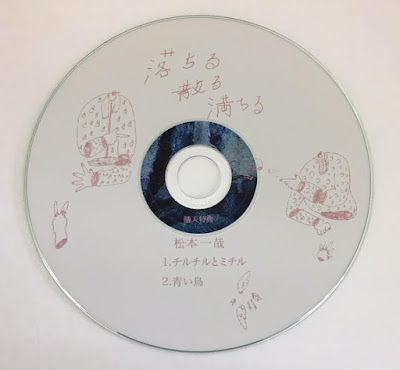 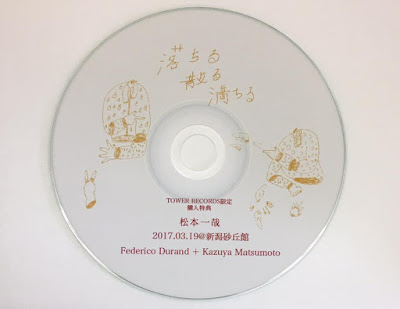 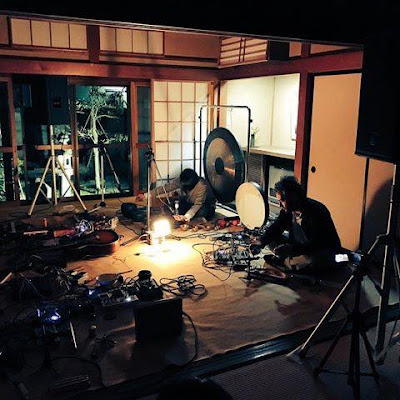 Thank you very much! F. 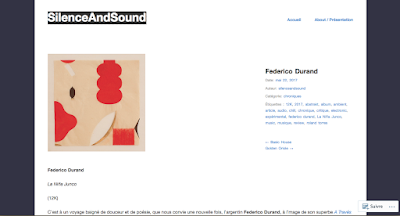 My new LP reviewed from Italy!

A beautiful review made by Ele-King (Japan) 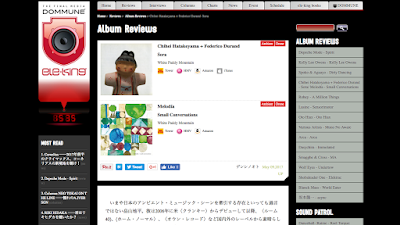 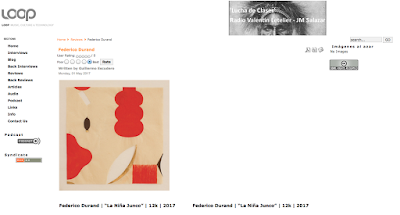 This is the second album released on 12k after the following A Través del Espejo (2016) of Argentine musician Federico Durand, based in La Cumbre, a town of the of Cordoba’s mountain range, who in the last four years have seven releases on 12k, Spekk, White Paddy Mountain and Pudú labels.
In this breakthrough creative production, Durand recorded all nine songs on this album in two days, using his first Crumar Performer synthesizer along with two looping pedals and Roland Space Echo RE-201.
Immersed in small sounds that unfold slowly creating unpolished infant stories that release the hiss itself for nostalgia. The oscillations are like sea waves of the sea that come and go and small objects like palitroques beat each other. The dance of reeds shaken by the wind is the fresh air that shakes this disc for its simple beauty.
*
Muchas gracias Guillermo Escudero y Loop! Saludos cordiales desde las Sierras! F.
Etiquetas: Argentina, Chile, Federico Durand, Guillermo Escudero, La niña junco, Loop, LP, New York

A wonderful review from UK! 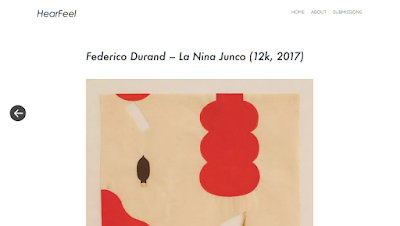 
6 years ago I would have found myself revising in the garden for some of my last school exams at this very table, perhaps beneath this same umbrella. 2 years before that, and I was revising for my GCSEs when I was 16. The scenery’s different now; the family home moved and now I sit by the canalside, the furniture is certainly a little worse for wear, but there’s a certain sweet nostalgia to being here. I sit here like an echo, a fair-weather ghost returning to familiar spots to work and write.
Bittersweetness is a running theme with Durand, a consistent trend in his minimal, organic constructions; in equal measure the reductive nature of his music creates environments both lovingly reverberant and simple, as well as crooning and wistful, yearning for places and people since passed. Take “Navidad en el bosque”, Christmas in the Forest: a brilliant reflection of time and space, soft static fuzz gently dampening the slow synth movements as the trees and snow close in, the world muted in its blanket of snow and foliage. The faded, distal glimmerings of “Una plaza a las vias del tren” (The Square Beside The Train Tracks) are similarly wanting, trickling out in crooning and tired cyclings, nothing more than a dream of place.
There’s a pastoral, even perhaps parochial vibe to certain moments here; “Melodia de felpa” and its later continuation shine in thinned strands of electronica, slow and simple abstractions suspended in rarified drones that brush the senses like blossoms in the air, or adrift dandelion seeds. Later, “El cascabel de plata” unrolls in soothing passages of tumbling synth lines, like distant and unseen church bells that ring and echo about the landscape, a barely detectable breeze wafting each note towards us.
Everything is dreamlike, each piece sounding as though it’s being slowly washed up on the shores of our mind, every tide a slice of time returned, every sloshing wave a moment of memory. More than happy to let it continue, closer Rain of Stars, “Iluvia de estrellas”, hardly touches the senses as it allows precious few floaty, twinkling chords to penetrate the cool void. The select flurries that do make it out of the darkness are faded, ancient in sound and sight; their place in the heavens is secure and enduring, without concern for ephemerality or transience. How many humans have lost themselves beneath them, dreaming themselves back through time under their fixed, continual gaze? Sometimes I ask the same question of Durand’s music.
Chris Doherty for HearFeel.
¡Muchas gracias por la escucha sensible! F.
Etiquetas: 12k, Argentina, Chris Doherty, Federico Durand, HearFeel, La Cumbre, La niña junco, LP, UK 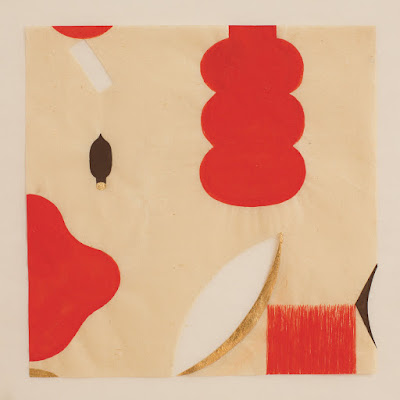 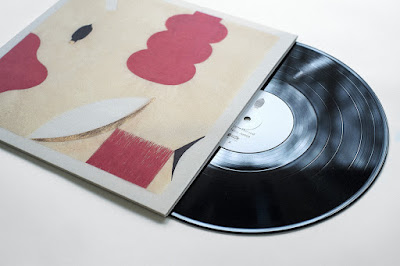 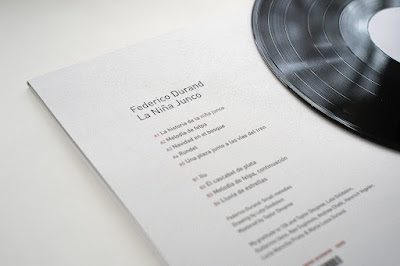 Argentinian musician Federico Durand returns with his 2nd full length album on 12k following 2016’s A Través Del Espejo (12k1085). Taking his already minimalist composition style Federico challenged himself by using only one synthesizer for this beautiful album of sparse, hypnotic dustiness. His talent for creating works of so much emotion out of so little attest to his concentration when working and his passion for the craft. La Niña Junco is a handwoven gem. Music with a humble origin and a deep resonating soul. Famed Argentinian artist Lola Goldstein graciously illustrated the album cover, caputuring the idea of memory and object that is so infused with Federico’s work. "Immersed in the beauty of the very moment, the songs for La Niña Junco were recorded in one take during two days, in a rush of inspiration. I used a small sound palette: one instrument, a Crumar Performer synthesizer along with two looping pedals and Roland Space Echo RE-201. The Crumar was my first synthesizer. I bought it many years ago and then gave it to a friend, who later lent it to my brother. After a very long time, I got it back when we moved to La Cumbre, a small town in the central mountain area of Argentina. As this instrument has a very limited but beautiful oscilator, it was rewarding to make small melodies using only its almost magical sound. I was enchanted to have the chance to play with my Crumar again: in many ways this album feels like returning to an early home. The electric noises of my old, broken keyboard, were an unexpected and musical gift and a humble proof of the passing of time." - Federico Durand, La Cumbre, 2017

You can purchase the vinyl and digital thorugh 12k Bandcamp: 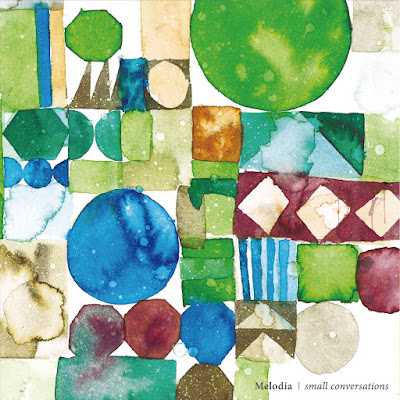 "Small Conversations" is New album of Melodía. Melodía is Federico Durand and Tomoyoshi Date.
In this work, hay made beautiful natural texture using acoustic guitar, chitters, piano, organ, etc. Space and time are arranged with exquisite sense. That sound is an elegant ambient music that makes you feel like a serene chamber music.

You need to click and enter to Vimeo to see the video. 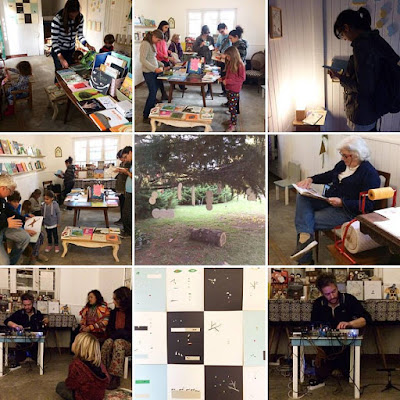 A beautiful exhibition and concert in our small bookstore in La Cumbre, Argentina! 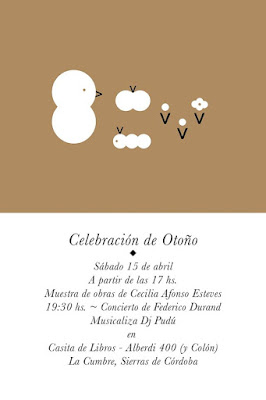 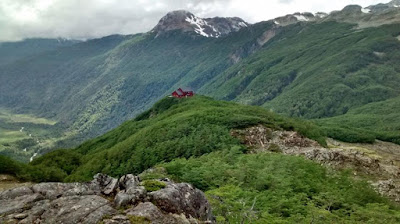 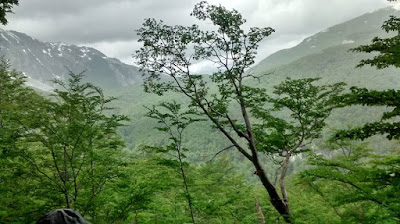 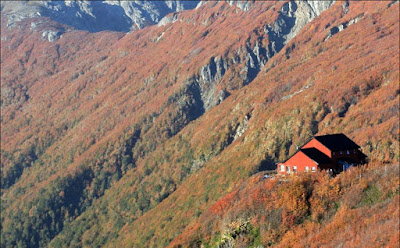 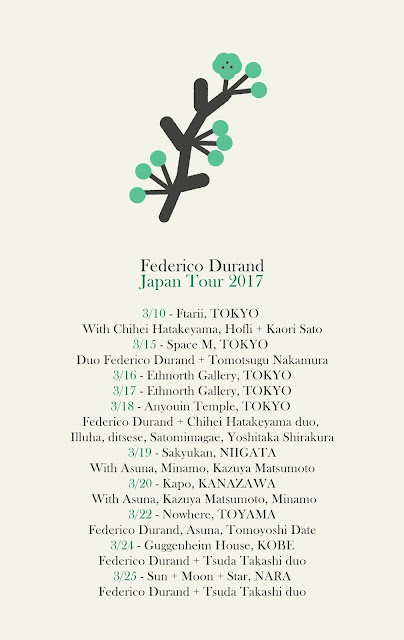 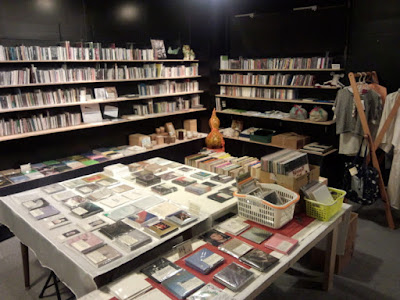 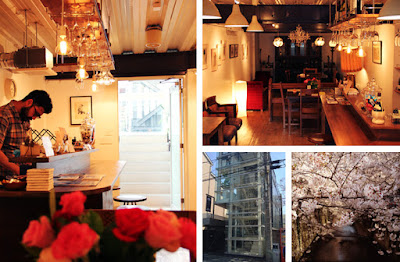 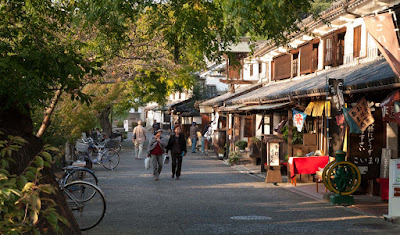 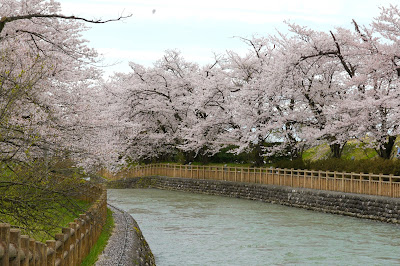 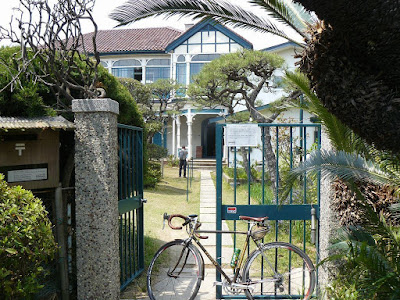 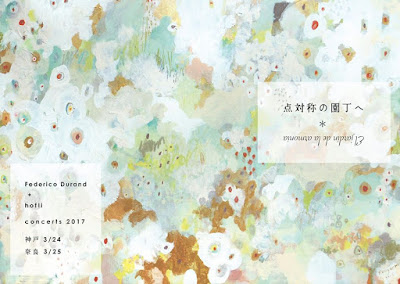 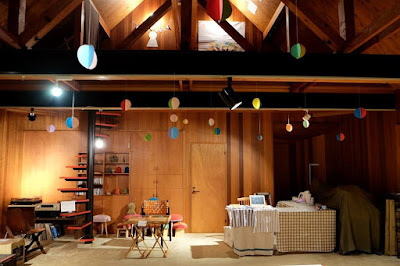 日時：2017年3月25日（土）受付開始：15：30 ／ 演奏開始：17：00出演：Federico Durand／hofli出店：井尻珈琲焙煎所会場：日＋月＋星〒630-8112 奈良市多門町35-2料金：予約3,000円 ／ 当日3,500円（予約／当日ともドリンクなし。珈琲は各自自由にご注文いただけます）協力：skima industries／日＋月＋星お問い合わせ：PASTEL RECORDS 寺田info@pastelrecords.com
Thank you very much! I am really happy to have the chance to my play music in Japan with many friends and visit beautiful places! I hope to see you there! Federico
Etiquetas: Federico Durand, Japanese Tour 花見 2017
Entradas más recientes Entradas antiguas Inicio
Suscribirse a: Entradas (Atom)