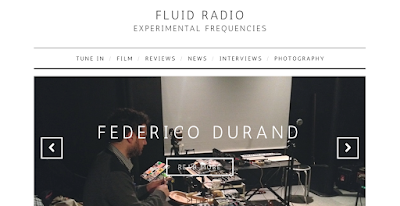 A Través Del Espejo is another highly accomplished album from composer Federico Durand, his first on 12k. Whilst employing a similar palette of instruments and techniques to previous (excellent) albums like El libro de los árboles mágicos, this collection seems to look less to the forest, hills and skies, instead radiating a warmer domesticity.
Bell-like sounds and scrapes feel close to the ear, close to the hand – you can almost imagine (and at times, hear) Durand reaching for small sounding objects, using microphones as instruments, pushing looping pedals, coaxing gentle collages out of his chosen ingredients.
Grain (whether sound or film), music boxes, glockenspiels, are sometimes associated with a particular strand of uncritical nostalgia, the same one that gives us ‘retro’ filters for smartphone pictures (perhaps an argument for another day) but there is none of that here; instead Durand gives us ten loose but perfectly formed miniatures that frame a sense of home as both domestic and dream-like.
Highlights could be the crystal clear high end chiming loop at the centre of Diorama, or the burbles and clicks of Canción de la Vía Láctea (Milky Way Song). Indeed, the whole second half of the album is particularly strong, seeming to swell outwards and upwards in a way that confirms Durand as a quiet talent, making the best music of his career so far. A Través Del Espejo is a thing of restrained wonder, a love song to home, hearth and the warmth of magnetic tape. I can’t wait to hear what’s next. – Highly recommended.
*
Thank you very much Fluid Radio for this wonderful review! F.
Etiquetas: 12k, A través del espejo, Federico Durand, Fluid Radio 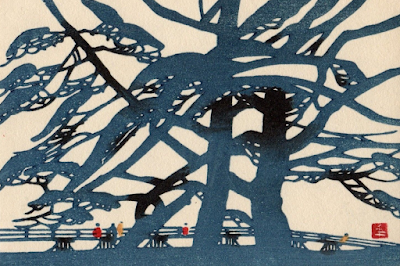 "A través del espejo" reviewed by Silence And Sound (France) 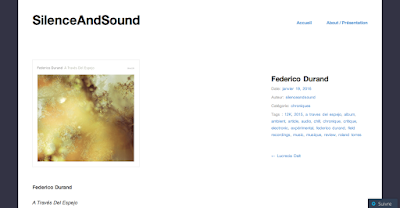 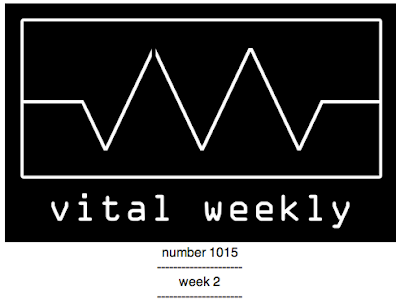 By now you must be familiar with the name Federico Durand, with his releases on Spekk, Own and Desire Path, either solo or with the duo Melodia. Apparently, like other musicians from Argentina, he's big in Japan and plays a lot of concerts over there. In 2014 he bumped into Taylor Deupree, head honcho of 12K and became friends and that friendship now brings us this album of new solo pieces, all inspired (apparently as always) by his family. The cover lists all of his instruments, which makes an interesting read: "Auris lyre hammered with a black pencil, synthesizer, piano, music boxes, Roland Space Echo RE-201, Ehx 2880, Mackie 402VLZ4, hokema, little objects, crystal cups bowed with a penknife, Koshi chime, Fostex X18, contact microphone, minidisc, Sony TCM-200DV, owl of wood, tape loops, scissor and masking tape"; I guess it sums up his love for small objects and all things analogue. I understand also that much of what Durand does is hands-on: playing all of this with his two hands and looping stuff on the spot, thus creating this very intimate sound his music always seem to have. More than before it seems we now hear snippets of voices, maybe from around his own house, children voices. It is perhaps a reminder of home-life when he is on the road? For me it's also another reminder: that of the music of Dominique Petitgand, who was also an avid taper of domestic life, and who also used small instruments around these home recordings; there is however one distinction and that is that for Petitgand it was almost obligatory to use them in every track, whereas Durand uses it more sparsely. For him the sound of his 'toys' play the most crucial role, and it makes his work less of a radio-play and it seems to be using a bit more melody, which he loops around and creates beautiful hissy pieces of music with. Sometimes, such as in 'Linternas Junto A La Laguna (Lanterns beside the lake)', the cassette hiss forms even the most substantial part of the composition but usually it's a few sparse notes on the piano, a bow playing a small object to create some overtones, and everything pitched up and down, to form a web of small tones, intertwining with each other. All of this is a highly natural setting, free from digital processing or other computer tricks. In the official world of music journalism one would say 'honest' music. I don't believe in such notions. But I'd say this is highly personal music, without caring too much about 'styles', 'trends' or 'scenes' and this is some damn fine release. (FdW)

A beautiful review of "A través del espejo"

Argentinian composer Federico Durand marks his debut release for 12K with A través del espejo. A glistening ambient daydream spun through crackling casette recorders, various small instruments, toys, bells and the fuzzy echoes turned air recordings that whirred softly in the background as he carefully crafted each track.
The ten track titles are talk enough; Recuerdos en Super 8 (Memories on Super 8), Linternas junto a la laguna (Lanterns beside the lake) or Hora de dormir (Time to sleep), each a small sunlit signpost into Durand’s oh-so-sparse instrumental world.
Babies coo-ing and children singing are the sole voices, making just one appearance on Hora de dormir. But they’re half-heard, just audible beneath the airy crackle and singular melody line. A dream or a memory, but a comforting one. Laced in nostalgia but defiantly anti-twee thanks to the album’s seriously slowwwwww pace: you’re too busy floating (or falling) to worry about anything.
Experimental and soft, lullaby material for all ages, A través del espejo is a glorious demonstration of the discipline and patience Durand exercises inside his toy-box cornucopia of odd machines and found sounds; a dreamworld in itself.
*
Thank you very much When I heard You & Kim for this review! F.
Etiquetas: 12k, A través del espejo, Federico Durand, Kim Hillyard, When I Heard You 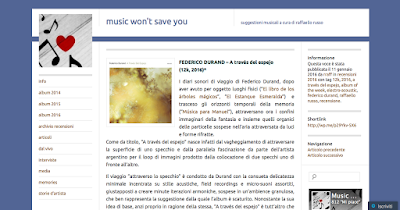