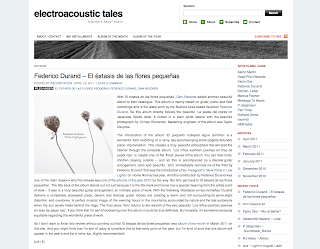 With ‘El éxtasis de las flores pequeñas’, Own Records added another beautiful album to their catalogue. This album is mainly based on guitar, piano and field recordings and is the latest work by the Buenos Aires-based musician Federico Durand. So this album directly follows the beautiful ‘La siesta del ciprés’ on Japanese Spekk label. It comes in a plain white sleeve with the beautiful photograph by Christy Romanick. Mastering engineer of this album was Taylor Deupree.

The introduction of the album ‘El pequeño huésped sigue dormido’ is a wonderful field recording of a rainy day accompanying some (slightly detuned) piano improvisation. This creates a truly peaceful atmosphere that will lead the listener through the complete album. ‘Los niños escriben poemas en tiras de papel rojo’ is maybe one of the finest pieces of the album. You can hear birds, children playing outside – and all this is accompanied by a discrete guitar arrangement, calm and beautiful. ‘Elin’ immediately reminds me of the ‘Film by Federico Durand’ that was the introduction of Ian Hawgood’s ‘Slow Films in Low Lights’ on Home Normal last year. And this contribution by Federico Durand was one of the main reasons why this release was one of the albums of the year 2010 by the way. But let’s get back to ‘El éxtasis de las flores pequeñas’. The title track of the album stands out not just because it is the title track and hence has a special meaning from the artists point of view – it also is a truly beautiful guitar arrangement, an intimate piece of work. With the following ‘Atardecer en las montañas’ Durand delivers a completely processed piece, decent and delicate guitar drones are creating a warm and rich surrounding for some slight distortion and overtones. A perfect musical image of the evening hours in the mountains, surrounded by nature and the late sunbeams when the sun slowly hides behind the ridge. The final piece ‘Kim’ returns to the warmth of this very peaceful ‘Los niños escriben poemas en tiras de papel rojo’. If you think that I’m sort of slobbering over this album it could be true definitely. But honestly: it’s somewhat seriously equitable regarding this wonderful piece of work.

So I don’t want to finish this review without pointing out that ‘El éxtasis de las flores pequeñas’ was album of the month in March 2011 on this site. And you might think that I’m sort of crazy to constitute this at that early point of the year, but I’m kind of sure that this album will appear in the year’s end list of mine, too. Highly recommended!

Thank you very much Christoph Berg for the heartfelt review...