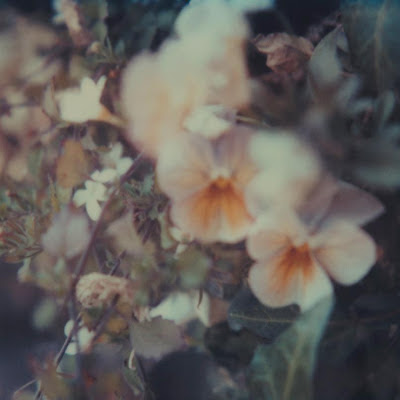 Brainwoshed, USA
A perfect pairing, Every Hidden Color is Argentina's Federico Durand and the US' Nicholas Szczepanik, both relatively young purveyors of dreamlike ambient music.  There are not really any surprises on this two track LP, which is a good thing:  it is a carefully constructed work that mixes beautiful, formless tonal drift with rich melodies of subtle construction.
Streamline
While Szczepanik has been rather prolific in short, diverse pieces (such as his Ante Algo Azul series of 12 3" cds), Durand has stuck mostly to the album length format, on works for Spekk and Own Records.  The two side-long pieces that make up Luz then seems to be a perfect middle ground for the two artists to work within.
The introduction to the A side of this work is really the only time that things are harsh:  a combination of fuzzy, almost abrasive noises and field recordings, creating a sense of tense urban chaos, which is soon counteracted by the appearance of delicate melodies.  These repeating tonal structures weave in and out, becoming the center of attention and enveloping the field recordings into a rich, powerful piece of music.  Slowly, almost imperceptibly throughout, these individual notes begin to blend together into a shimmering, amorphous drone that conveys the same lush beauty, but in a less structured manner.  Oddly enough, it is on a colder, isolated, almost creepy note that the side ends.
On the other side, more pastoral field recordings are mixed with looped, abstract textures to fascinating effect.  Atop this, slightly treated guitar is placed, mostly just delayed, so it retains the instrument’s natural sound.  The combination of conventional sounding guitar and processed, textural ambience works well together, and eventually the whole thing is bolstered by what sounds like layers of droning synthesizers, ending the album on a drifting, billowy passage.
Throughout Luz, a sense of delicate, but powerful beauty emanates from the layers of electronic sound and cautious melodies.  An unending stream of tone flows like a slow river, carrying glorious textures with it.  While there is an admirable simplicity to the way the album is constructed, it is by no means sparse or skeletal, it has just enough going on to be captivating, while still remaining meditative and calm.  Durand and Szczepanik compliment each other perfectly, and the result is a beautiful piece of sonic experimentation.
Creaig Dunton
*
Thank you very much Creaig Dunton & Brainwashed, F.
Etiquetas: Brainwashed, Drag City, Every Hidden Color, Federico Durand, Luz, Nicholas Szczepanik, Streamline
Entrada más reciente Entrada antigua Inicio